My dad was so often a source of strength and encouragement to those who knew him. There is a story I tell often in the RHYTHMinTWENTY and ROGUE leadership journeys that seems even more relevant and important today as we face challenges and struggle as a result of the pandemic. So I wanted to share with you some of what I have written on this deeply impacting event many years ago.

It was hot and still. The clouds came quickly from the west. It was an ambush, the kind of storm that stirred up fear in the hearts of people on the plains for generations. For five minutes, the sky threw hail toward the ground like it was releasing an intense fit of rage. When the storm finally retreated, tens of thousands of dollars worth of corn was strewn about and shredded in the muddy fields of our farm, pulverized by the massive hailstorm.

Forty-five minutes later, my dad drove up the driveway in his olive green Ford pickup. And despite the devastating loss, he seemed to be the same man. Impacted, but not devastated, still retaining a sense of humor, and consistent in how he was treating others.

Later that evening, I watched as he took one of his long, slow walks around the parameter of his fields, which had been ruined by the hailstorm. An hour into that walk his best friend drove out to see him and joined him on that walk. It was then that I knew this was serious. Years later, that friend told me that my dad was working things out with God while he was on that walk. He mentioned that he would be out there for a while, and he said that my dad had told God if He wanted his tithe and 10% that year, He was going to have to come down and get it because it was lying all over that field. 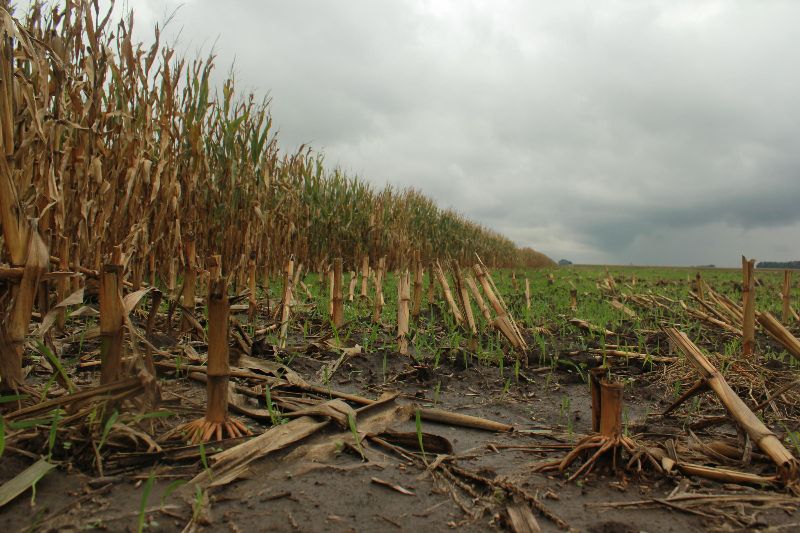 Even in that moment he had a sense of humor. The extreme circumstances of that day that came on so suddenly did not take him out or cause him to compromise the essence of who he was. I will never forget the image of my father on that long, slow walk that day. I remember him taking in the loss and surveying his wasted fields. It was in that moment that that his words and actions were fully aligned and that his life, which was already an inspiration to so many, gained even more strength and influence.

On the day the hail came, his circumstances changed dramatically, particularly his financial standing. However, his focus and priorities remained steadfast. Years of long slow walks and consistent ongoing conversations with God had readied him for moments like this. On a day-to-day basis, his own pursuit of space balanced his emotions, his energy, his time and his priorities. In many ways, he was ready for a day like this. It was painful to be sure, even devastating, but it didn’t knock him out. It, in fact, strengthened him.

To me, that is the value of practicing this thing we call ‘SPACE’. It is why we make it such a priority in Harbor Ministries. It is why we challenge leaders to fight for an entire day of space every month.

The consistency and practice of quieting down and listening, the relentless practice of pursuing SPACE, is a difference maker. It is what will give us strength and resilience in these days we find ourselves. Jesus was our model. In crisis, in struggle and pain, in success in deep sorrow, in times he needed direction, he separated and sought the kind of strength that only God can give when we pull away for extended times. He fought for space.

Our marriages, our families, and those we influence desperately need us to come into the harbor on a regular basis. The world needs difference makers, men and women who have a weightiness and strength to them that is different.

Fight for those long slow walks, fight for those times in the harbor. When we practice that discipline of solitude and listening over the long haul, we will be ready for whatever this world and the enemy throws at us.